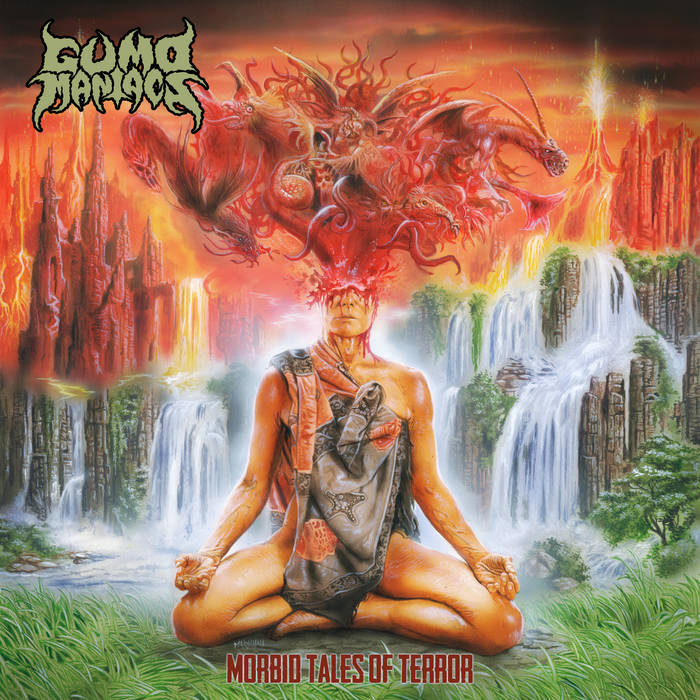 "Morbid Tales Of Terror" is so much more than just another GumoManiacs record. During the "Corona Pandemic Summer" of 2020 many artists were at the edge of losing everything and when GumoManiacs mastermind Daniel "Gumo" Reiss went on social media to tell his beloved Thrash Metal Family that there are no means left to keep going as a band the ultimate magic happened:
Within a few weeks the community sent enough financial means in the "Your Name In The Booklet" donation run to help make a seemingly lost album happen after all. Like this "Morbid Tales Of Terror" became a symbol of Heavy Metal unity during difficult times and therefore is clearly the most meaningful record the band has ever made.

Musically "Morbid Tales Of Terror" takes you out for a savage ride on 11 burning bullets of intense German Thrash Metal.
Huge powerful riffs that have been forged on the anvil of high class Metal guitar playing lay the foundation for Gumo's ripping guitar solos, that take a respectful bow to heroes like Michael Schenker or Dave Mustaine, while still passionately embracing the unique rawness of Teutonic Thrash Insanity.
The thunderous growl of the highly professional rhythm section, consisting of Michael "Air" Hofmann on drums and album producer Robert "Hubi" Hofmann on bass, furiously yells at you with an unique 3-Piece-Band interpretation of Gumo's deadly compositional cocktail of 80s Thrash Metal, Classic Speed Metal and NWOBHM that makes even an almost Priest & Scorpions-styled track like "Last Man Standing" sound like a juggernaut of heaviness.

Daniel "Gumo" Reiss, the raspy voice of independent German Thrash Metal, is back from his vault of meditation to inspire and tell stories that go from almost spiritual spheres on atmospheric tracks like "The Architect" or "For A Greater Cause" to reinterpretations of world famous tales like the 1982 movie "Conan The Barbarian", which the high speed track "Of Warlords And Vengeance" is based on.

At least once in a lifetime any true German Thrash Metal band needs to have a cover artwork by the one and only, the legendary Andreas Marschall, who is world famous for his work for bands like Sodom, Kreator, Grave Digger, Blind Guardian and many more.
The title track "Morbid Tales Of Terror", which is based on one of the most famous and powerful spiritual teachings of our time called "The Power Of Now" by Eckart Tolle, laid a great foundation for creating another classic Marschall Manifest.

The HQ WAV Digital Download is included in the CD Version Standard. Especially if your a preordering, you will get this one immediately, so you can start listening to the album RIGHT NOW!!! 😱😱😱

Bandcamp Daily  your guide to the world of Bandcamp

Featured sounds by K.Spark and WIZDUMB, plus Basi joins the show to discuss his latest release.